The fourth episode of Marvel’s Moon Knight on Netflix features a number of Easter eggs from the comics and other TV shows. We’ve got your guide to these references in this recap for those who might not have seen it yet or were just looking for their next binge watch.

The “moon knight easter eggs episode 1” is a series of easter eggs that are found in the fourth episode. The first easter egg is a reference to Iron Man. 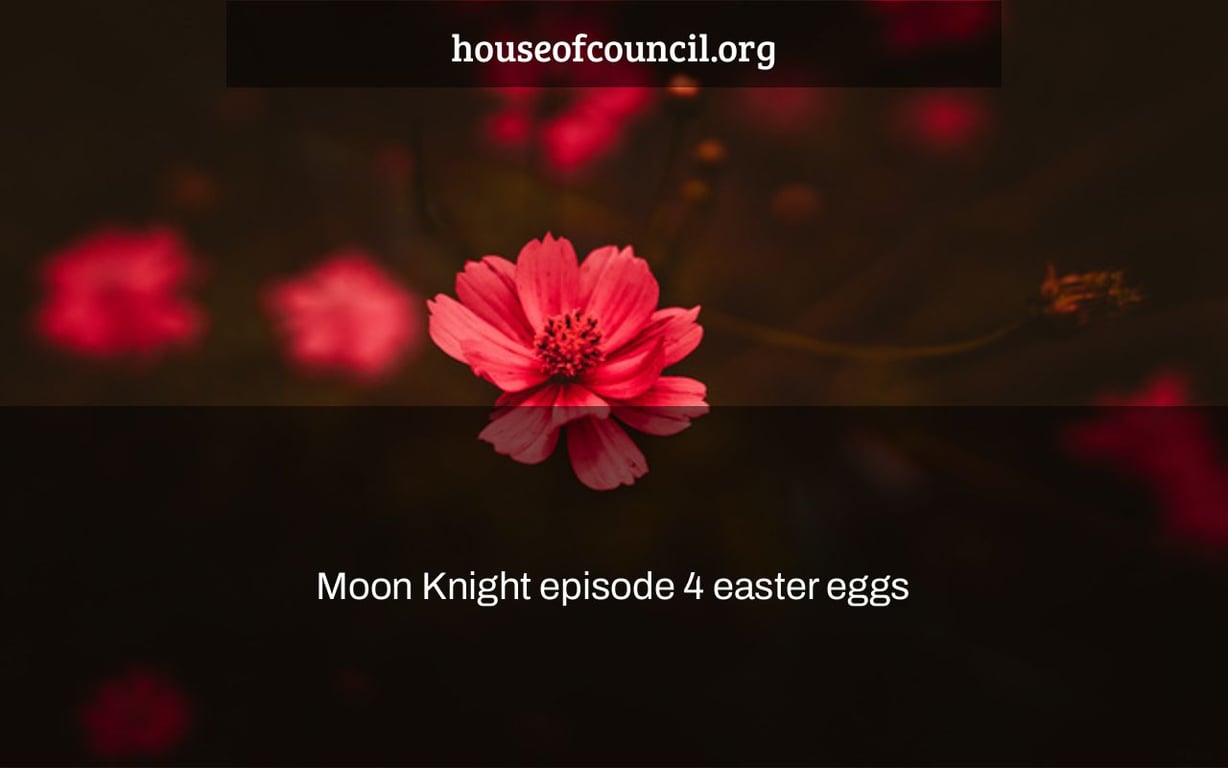 On Disney+, Marvel’s Moon Knight is far over its halfway mark after three episodes. And, like in previous weeks, the Fist of Khonshu’s current chapter is jam-packed with great information and hidden insights in under an hour. To understand more about the greatest easter eggs in Moon Knight episode 4, we take a deep look into them.

Alexander the Great was a Greek king who reigned

As Steven and Layla get separated inside Ammit’s tomb, the former finds himself inside a section filled with a huge sarcophagus. Steven then converses with Marc and tells him that the tomb before them belonged to Alexander the Great was a Greek king who reigned.

During his time, Alexander the Great was a Greek king who reigned built a massive empire that included Greece and Egypt. In the setting of Moon Knight, and even the Marvel Cinematic Universe, the great conqueror was buried in Egypt as one of its most revered and in the style of their pharaohs.

The genuine site of Alexander’s tomb, according to most scholars, is somewhere near Alexandria, Egypt, rather than in the desert.

Harrow explains in this episode of Moon Knight that Marc was one of the mercenaries entrusted with assassinating a party of archeologists studying a location in Egypt, including Layla’s father. Marc’s wife confronts him about his genuine role, distraught. He then acknowledges to being there but denies any involvement in her father’s death. Marc then claims that when his partner got too greedy, he executed the deed.

Marc’s accomplice in the comics is another mercenary called Raoul Bushman. He is depicted in the source material as a bald African-American man with white and red skull makeup on his face.

In a mental institution

Harrow and his men come shortly after Layla and Steven collect Ammit’s ushabti. Marc takes over the body at this moment and refuses to surrender the item to Harrow. The mercenary then battles Harrow guys until he is shot in the chest by the cult leader. Marc then enters a black abyss before waking up inside a psychiatric facility as one of its patients suffering from mental illness.

Marc is put in a similar scenario when he finds himself within an institution in Marvel Comics’ Moon Knight Volume 8, which was written by Jeff Lemire and drawn by Greg Smallwood. Doctor Emmet, the facility’s chief, is revealed to be an avatar of Ammit who plans to take over Marc’s body.

Based on the source material, it seems that this current episode of Moon Knight was heavily influenced by that specific run of comics.

The third sarcophagus was discovered.

Marc sees another tomb in a separate chamber after exiting Harrow’s office and rescuing Steven from a sarcophagus. This one is standing up and has a significant position in the photo.

There are rumors that this container contains Moon Knight’s third ego, Jake Lockley. Marc awoke to find himself stabbing one of Harrow’s men after losing control to Steven in the previous episode. He then inquires of the meeker personality as to whether or not this was his doing, which he denies.

This bit, and the one with The third sarcophagus was discovered., is strengthening the speculation that at some point, Lockley’s personality will surface in the remaining episodes.

This week’s Moon Knight episode closes with a bizarre Hippopotamus-like monster greeting Marc and Steven. Tawaret, the Egyptian goddess of fertility and childbirth, is seen here.

It’s unclear how she’ll contribute to the narrative, whether she’ll assist the two in escaping, or whose side she’ll be on. What is definite is that her entrance is a complete cliffhanger, based mostly on Egyptian mythology rather than comic books.

The “crawley moon knight” is a reference to the Marvel comic book superhero Moon Knight. The character was created by Doug Moench and Don Perlin, and first appeared in Werewolf by Night #32 (1976).